There are animals that become an inseparable part of the urban landscape. Pigeons are one of the most common bird species in the cities. They breed quickly and enjoy a good life. However, the large amount of pigeons coupled with the accelerated construction in the cities are causing their nesting places no longer in the park but the laundry areas in buildings, roofs, gutter and other areas too close to the people. The pigeons produce dirt and noise, transmit lice and fleas, and pose a health hazard. Therefore, there is a constant search for methods to remove them. One method is spikes to remove pigeons. This is a relatively popular method, it has advantages but is it the best method available today? About this later ...

How do spiders work?

Spikes to remove pigeons are thorny at their end, causing the pigeon to repel them. Even if they do not significantly injure the dove, they cause pain at best when it lands on them. In addition, they constitute an unstable area that makes it difficult for the pigeon to stand and stabilize. The combination of a very unpleasant feeling in her foot and landing along with the instability that causes the lick leads to the fact that the pigeon eventually flies away and searches for another place.

In the market, different types of spikes are sold to remove pigeons, which are not all effective, especially for the pigeons of today who are eating fairly well and weighing accordingly. Plastic spikes for example are not effective enough that they are too soft and do not cause the pigeon a deterrent pain. In addition the plastic is not durable enough. Spikes made of iron and tin are also not sufficiently resistant to weather conditions and have been found to be ineffective and deterrent enough. The only kind that still deters the dove (meanwhile ...) is stainless steel spikes.

Spikes or transparent film - what should I do?

Since spikes to remove ions are considered a relatively popular method for pigeon removal, we have chosen to compare the new system Shokteip to spiders. The Shoktaip ion removal system is based on a transparent film with aluminum strips embedded in it. The film is connected to a power supply connected to an electrical outlet. When the pigeon lands on the film it causes a slight electric current to pass through the aluminum strips. When she feels the light current, it makes her uncomfortable and repulsive. The pigeon has an excellent memory and this deterrent keeps it away forever. The transparent film has several advantages over the spikes. The first advantage is that the film is transparent and almost invisible, as opposed to the spikes that are definitely visible, especially when it comes to the wide area you want to block. Another advantage is the fact that it does not cause the pigeon pain as landing on the lobe but only discomfort. The installation of the film is very easy and includes only pasting the film on the appropriate area and plugging in to the electricity. This method was found to be particularly effective, suitable for various types of surfaces, convenient for limited spaces such as gutters and large areas. The film is resistant to all weather conditions as opposed to many types of spikes that rust or dry in the sun. The Shoktaip system is the next generation among pigeon removal products and combines great efficiency, humanity towards the pigeon and non-harm to the aesthetics of the place. 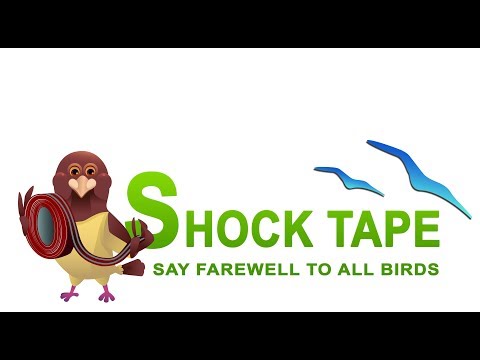